What is a Choking Hazard?

A choking hazard is any object that could be caught in a child’s throat blocking their airway and making it difficult or impossible to breathe.

What different foods are choking hazards for children?

Food is a common choking hazard. Many children do not chew their food well so they try to swallow it whole. Foods that are the most dangerous are round and hard. If your child is 4 years of age or younger either take extra safety measures or don’t feed the following foods to your children at all:

How small should I cut food for my child?

Cut food into pieces no larger than one half-inch; this will make sure that if your child swallows their food whole, it won’t get stuck in their throat

My child likes to walk around and eat, is this okay?

No, you need to insist that your child eats at the table. This will ensure that they’re eating at an upright position, and they are focusing solely on eating.

Is it okay to feed my kids in the car?

Feeding kids in the car is not a good idea. Kids that eat in the car are at risk for choking and often go unnoticed by the person who is driving.

Is it important for me to supervise my child when they are eating?

Yes, you never know what might happen when you are not looking. If your child chokes on an object, the object stuck in their throat is not allowing oxygen to reach the brain. Within 4 minutes or less brain damage or even death can occur.

My child is just beginning to crawl. Are there other objects I should be aware of as possible choking hazards?

Yes, infants and young children naturally put things in their mouth. When they begin to crawl, small objects that you normally wouldn’t notice are key targets for them to choke on. To ensure a safe environment, watch out for these objects or objects similar to these.

Why are latex balloons a hazard for young children?

Latex balloons are a leading cause of choking deaths to children who are 8 years of age or younger. Children inhale latex balloons (mostly while trying to inflate them) or choke on the broken pieces. Latex is dangerous because it is a smooth material and can conform to the child’s throat, blocking the airway and making it impossible to breathe. Performing the Obstructed Airway Maneuver is usually no help because the air that does get through can make the blockage worse by completely covering the throat. Using your fingers can easily push the balloon further back into the airway. To be safe, never allow young children to play with latex balloons. Instead, give them the shiny foil balloons. They’re easier to inflate and tend not to burst into pieces. Mylar is a common brand as well.

How can I safe proof my house from objects that my child could choke on?

Before they begin to crawl, get down to your child’s level and look for things that could be picked up by them. Then check in and under furniture and cushions. Also, make sure your children’s toys are always safely put away. Store toys for younger children separate from those for older children.

My child has a toy labeled “not for children 3 and under.” Does age really matter?

Yes, you should always follow the age limit and avoid toys with small parts. If you are not sure which toys are choking hazards, get a small parts tester, and pay attention to toys that have been recalled.

What is a small parts tester?

A small parts tester is also called a “choke tube.” It is designed to see what objects are small enough to be choking hazards to children 3 years of age and younger. If the object fits in the tester then it is too small for children of that age to play with.

What should I do to be better prepared if my child chokes?

The best action to take is to be aware of all of the dangers and prevent them. If an emergency does occur be sure to call 9-1-1 — with airway obstruction you can’t waste any time. Also, take a CPR course to better prepare yourself if your child or someone else needs help.
Visit www.FirstAid.org  or call 888-242-4259 to find out dates and times for CPR courses in your area. You can also go to https://firstaid.enrollware.com/schedule to find classes in your area.

(CNN) Babies born in New Jersey this year will go home with a sturdy, safe box to sleep in and additional newborn essentials -- all for free. On Thursday, the Garden State became the first in the US to launch a universal baby box program in an attempt to reduce infant mortality rates.

The baby box program follows the example of Finland, which has had a similar program in place since the 1930s. Any expecting parent or parents of infants younger than 3 months old in New Jersey can take a short online educational program and receive a box filled with newborn essentials that can also serve as a safe sleeping space. 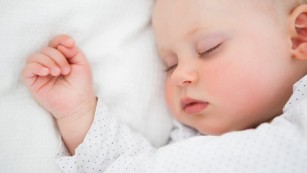 SIDS: Infants and parents should share a room, new report says The Baby Box Co., a California-based company, paired up with New Jersey's Child Fatality and Near Fatality Review Board on a grant from the Centers of Disease Control and Prevention in order to reduce Sudden Unexpected Infant Death and improve family health care.According to the company, the program will continue beyond 2017 based on its success, measured by parents' use of the boxes and improvements tracked in the state's health outcomes.The cardboard boxes, distributed at Cooper University Healthcare and Southern New Jersey Perinatal Cooperative, come with a firm mattress, a waterproof cover and a fitted sheet, in addition to diapers, wipes, breast cream, breast pads, a onesie and an activity cart: about $150 in materials.Jernica Quionnes, 33, a new mother from Camden, New Jersey, came to the program's launch Thursday to receive a baby box. She has a 2-month-old, Bless'n."I have it in the living room right now," she said, noting that it's lightweight and easy to move around. "I never thought about having one, but it lets me put the baby down while I'm in the kitchen."Baby Box Co. CEO and co-founder Jennifer Clary said the company will distribute about 105,000 free boxes in New Jersey -- the anticipated number of births in 2017 -- ensuring that every expecting family in the state can get one.To receive a box, parents must register for free at babyboxuniversity.com as New Jersey residents and include valid contact information and mailing address. They will watch a program lasting 10 to 15 minutes and take a short quiz to get a certificate of completion. Then, they can choose to collect their box from the closest distribution partner or have it shipped to their address.The Baby Box Co. launched its first city-wide initiative in San Francisco in November. The boxes are also available to people who live outside New Jersey or San Francisco for $70 to $225. Swaddling and SIDS: About that alarming study ...Baby Box Co. initially started as a "baby shower in a box" product meant for gifting to friends and family, Clary said. But after visiting Finland to learn about its health care system, the company pivoted to integrate an educational platform. In Finland, "maternity boxes" are an institution, of sorts, parents there said.Satu Korkohen of Helsinki, mother of 2-week-old Emma, explained that the box she received introduced her to parenthood and gave her an idea of the optimal sleeping conditions for her baby."The products inside as well as the box itself are clues to good parenting," she said. "Once you see the tiny baby nail scissors, you start wondering how often will you need to use them, or the bath thermometer. So even if you could afford to purchase all the stuff, it's emotionally very comforting to have the essentials ready at hand and delivered to you."

All expecting parents living in New Jersey are eligible to receive a Baby Box, which includes newborn essentials.

Organizers say the online program for New Jersey parents will help them make safe, healthy choices and decrease babies' risk of death due to an unsafe sleep environment or Sudden Infant Death Syndrome, one aspect of Sudden Unexplained Infant Death.

There are an estimated 3,500 deaths from SIDS and other sleep-related deaths in the United States each year, according to the CDC. Forty-four percent of these are caused by sudden infant death, with 25% accidental strangulation or suffocation in bed and the rest unknown.

US Department of Health and Human Services guidelines for a safe sleeping environment for babies say parents should use a sleep surface such as a firm mattress or safety-approved crib covered by a fitted sheet, and nothing should be covering a baby's head. Additionally, blankets, crib bumpers and pillows should be kept out of the sleep area. Loose bedding and soft toys should also be left out, and smoking should be forbidden near the baby.

Babies should always be put on their back to go to sleep and be dressed in a one-piece sleeper, without a blanket, according to the guidelines. Lastly, the baby's sleep area should be placed next to its parents, but parents should refrain from letting the baby sleep in an adult bed, chair or couch with parents or anyone else.

In 2016, an estimated 93% of infant fatalities associated with SUID in New Jersey were related to sleep and sleep environments, according to a report (PDF) from the New Jersey Child Fatality and Near Fatality Review Board.

"Every year we review instances in which infants die suddenly and unexpectedly," said Dr. Kathryn McCans, an emergency department physician at Cooper University Health Care Hospital and chairwoman of the review board. "In a significant proportion of these deaths, an unsafe sleep circumstance is a contributing factor." Find out more at www.BabyBoxUniversity.com